Active Record validations are an integral part of any Rails application, and with good reason. Maintaining a comprehensive set of validations guarantees that only valid and consistent data will be written to your database.

That’s great, but what about data that is already in your database? While validations ensure that your data is valid when written, they do not guarantee that it will stay that way. So how often does valid data suddenly become invalid? More often than you may think. Here are just a few examples of how it can happen:

So you might have some invalid data, so what? Why should you care? Here are two reasons:

1. Having a single failing validation will block the whole record from being updated. This means your users may see errors for fields they aren’t even editing. This can be even more confusing if the field failing validation is an internal field and isn’t even on the form. 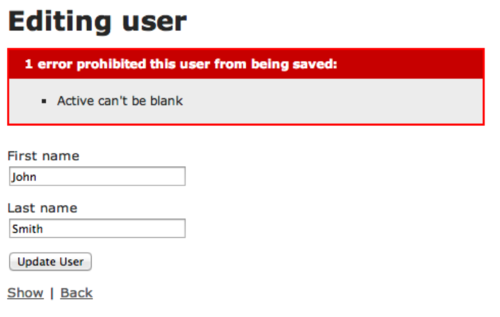 Fig. 1 - How to frustrate your users

2. Validations are like assertions; they represent assumptions that your application is making about the underlying data. Having invalid data means those assumptions are no longer true which means your code may start behaving unexpectedly.

One of the greatest benefits we’ve found in keeping our data clean is that it helps unroot bugs that we otherwise might not have seen. When we find a validation error and start digging into it we often end up finding a significant bug in the code caused by some obscure, yet valid user edge-case.

Ok, so you’re convinced that keeping your data valid is important. Here’s what we do at Gusto to make sure our data stays valid, and it has helped us time and time again to catch bugs before our customers do.

The principle is very simple: run validations on all records in an automated job and alert the dev team when something fails. There were a few design requirements however:

Running validations periodically has been so helpful to us that we’ve decided to open-source it.We packaged the rake task into a gem and named it BrokenRecord. The source code is available on GitHub.

To use BrokenRecord, simply add this to your Gemfile and run bundle install:

You can use BrokenRecord to scan all the records for all models in your application, or you can scan specific models:

BrokenRecord can also be configured to always skip some models and to run a given block of code before each scan. We configure BrokenRecord in an initializer. Here’s an example:

There’s a traditional way of looking for bugs by starting out stepping through code in your head in much the same way a computer does. Then there’s this other way where you start out looking for inconsistencies in your data. It’s sort of like looking at bug finding from a bottoms up approach (data to code) instead of a top down (code to data).

"Hygiene is important. That’s one of my failings. So I’m always being called on that."

Keeping our data clean has been tremendously helpful to Gusto, so we hope you’ll find this gem useful too. Your data may be a diamond in the rough right now, but treasure it, polish it carefully, and it’ll shine!

Do Things That Scale: Engineering a Modern Business

As applications grow, their size and complexity erode away at their efficiency. As engineers, we know that there are two

At Gusto, most of our application is written in Ruby, but our tax calculations are done in a C library.