Back in September, the engineers at Gusto (formerly ZenPayroll) made a public commitment to increase diversity within our team. As a first step, we set a goal to raise the number of full-time female engineers from 11% to 18% — the same number of female computer science majors in this country. We promised that we’d report back in January 2016 with our results, so here we are today.

I’m happy to share that as a result of our efforts, we reached (and surpassed!) our initial 18% target. Our engineering team now includes 21% full-time female engineers.

Here are our current gender numbers at Gusto: 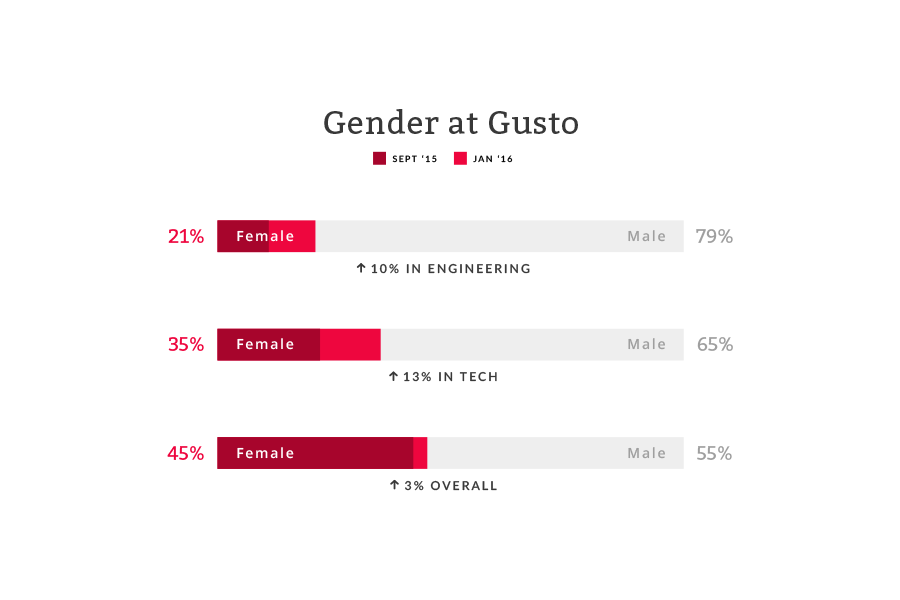 In the above chart, "engineering" is defined as full-time female software engineers, so that number excludes interns and contractors. "Tech" is defined as our engineers, technical product managers, and designers.

We’re not prioritizing diversity just to make ourselves feel good — we’re doing this because diversity helps us build better software. More perspectives allow us to see things we never saw before, and we can make better decisions as a result. Even if there were zero benefit to us, we’d still be doing this because we believe it’s our role to make the world a little better. By bringing more diversity to the engineering field, we hope more women will study computer science and end up with positions at great tech companies. That’s our hope, and we’re going to continue to do whatever we can to work toward that.

Top three things we learned from our diversity recruiting efforts

In just over four months, we doubled the ratio of female to male engineers. Achieving this milestone was no easy task. It took a lot of introspection and hard work. In our previous post, I outlined the strategy we would take to increase our female headcount. Now that we have four months of data under our belt, I can finally share a few of the things we’ve learned along the way:

1) Sometimes the most radical ideas are the most effective

In the fall, we made an extreme decision to outbound source 100% female candidates until we hit our target — and we stuck with it. The idea was pretty crazy in the beginning, but the impact was huge. To other companies looking to bring more gender diversity to their teams, I highly recommend this strategy to help you kickstart your efforts.

We went all-in at the Grace Hopper Celebration of Women in Computing, and it was so worth it. To stand out, we started our recruiting efforts way before the actual conference began. As a corporate sponsor, we were able to recruit more actively by taking advantage of their book of resumes. Starting two months prior, we conducted as many phone interviews as humanly possible. We screened 2,000+ resumes and interviewed nearly 100 candidates. Our team was blown away by the stellar female candidates we met and the competition that’s emerging as a result of the conference. 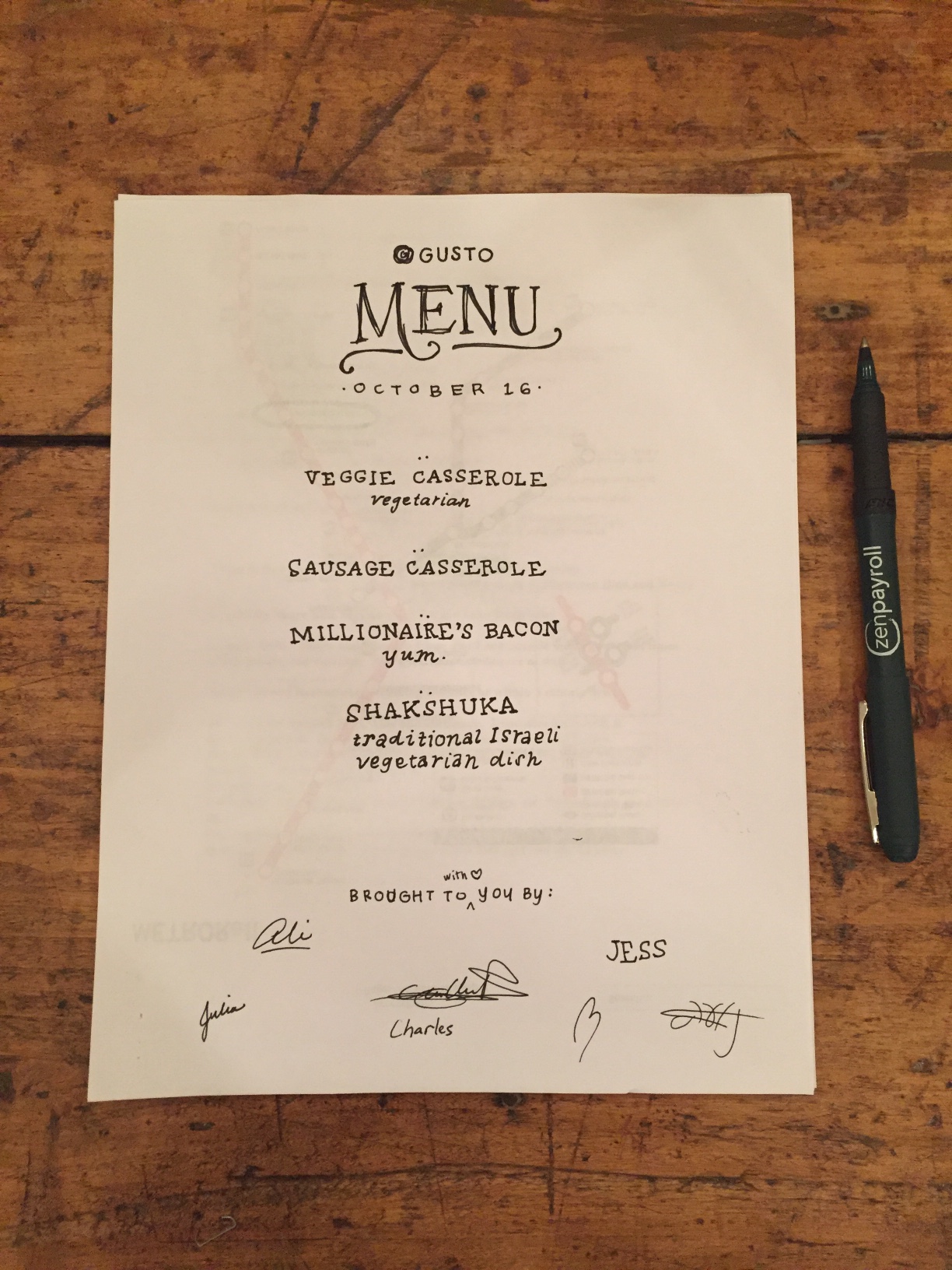 *We invited a few of the Grace Hopper attendees to our AirBnB and cooked breakfast for them!*

3) Hold yourself accountable by making your goal public

We didn’t just set our diversity goal internally — we talked about it publicly to make sure others could keep us accountable. A number of the female candidates we hired since September told us that the main reason they applied to Gusto was because of our blog posts. Sharing our inclusive engineering culture with the world has dramatically helped us reach candidates that share our values. If you don’t have a blog, set one up, so you can have a platform for sharing the things you and your team believe in.

Building an engineering team that values diversity is about more than just hitting hiring numbers. It’s about making that belief a part of your culture. While we’re proud of the work we've done so far, we also realize that our journey has just begun. We’re working with our People team to help us strategize ways to increase diversity across other dimensions — such as ethnic diversity — throughout 2016. We’ll keep you posted on our progress right here on the blog.

Thank you for following along over the past few months. Our team has a long way to go in terms of creating a more gender-balanced team, but we’re taking the steps to get there. And over time, our hope is that all of these small steps will add up to something really meaningful in the end.

How to build a service-driven engineering team

How do you transform your engineering culture? It starts by finding the thing that stitches you together. For our team,